Geotagging involves attaching your location data to the posts, images, or anything else you make available on social media. Geotagging typically involves using your gps co-ordinates to locate your and tie your photo, or tweet to the location it was taken in or sent from. This information can also be crossreferenced, for example, with Google Maps, or Google Earth to represent locations more intuitively. We’ll look at positive aspects of geotagging tweets later, but for now I’m going to focus on the privacy aspect.

Twitter have mapped every geotagged tweet sent in Europe since 2009, visualised below, and it gives a good, and impactful idea of what geotagging tweets might mean. 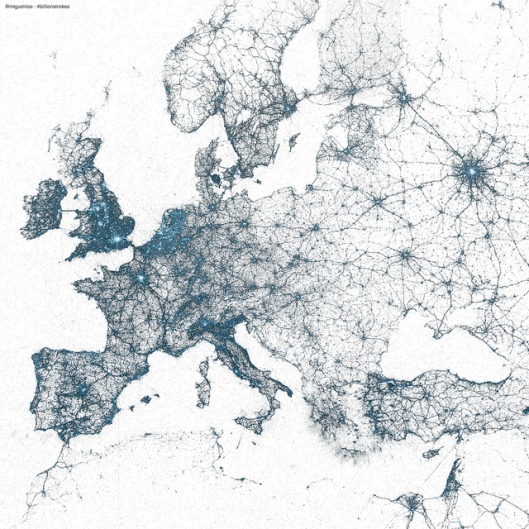 Humboldt Sate University have a map of hate, which tracks racist, homophobic, or anti disability geotagged tweets across the USA, in some ways, perhaps, a more positive use of the technology.

There are good reasons to Geotag tweets (or Instagrams, Flickr Photos…). It can be useful to have location information attached to tweets for all sorts of purposes, and, in education, it can be extremely useful to be able to use a portable device, on a fieldtrip, that geotags information for you, gives you the gps location information, and is displayable on Google maps, earth, and mapping software.

On Twitter, it’s an opt in feature, so, it’s not set unless you set it up. Twitters FAQ is here if you are interested.

Berkley have an interesting project, highligting the potential prviacy pitfalls of geotagging on both Twitter and Instagram. You can type in  users handle, and, if they geotag, the site scoops up their posts, grabs the gps, and crossreferences them with Google maps, letting you know what someone tweeted or instagrammed, where they were when they sent it, and when. The site is called Ready Or Not, and it allows you to search for twitter users, and, if they geotag, map where they were, and when they were there, based on tweets they sent.

On the Ready or Not site, you can also bring up a map with street names, and cross reference it with the persons timeline – which has the timestamp and the tweet. Where, when, who, down to the minute and the street.

Privacy, your data, and the Internet. Increasingly educators are encountering the need to educate their students about data, privacy and the reltionship between students and their devices. The Ready or Nor site is set up to remind people of some of the privacy pitfalls of the internet. It has links, too, talking about internet privacy, and how to disable geotagging. The ability to display the location and movements of individuals live in class could be a good introduction to aspects of digital citizenship, digital footprints, and privacy on the internet.

Terms of Service .org have a simplified breakdown of different sites terms of service, and a vidsual ranking system that gicves a good introduction to differening levels of privacy, and data ownsership.